When the time came to turn his attention to community service eight years ago, Silversage Advisors President Jeff Garell was passionate about helping children secure their futures through quality education. That passion clicked with KidWorks’ mission to help them and their families lead more successful lives. California Business Journal wrote a nice article on this partnership, which you can read below. 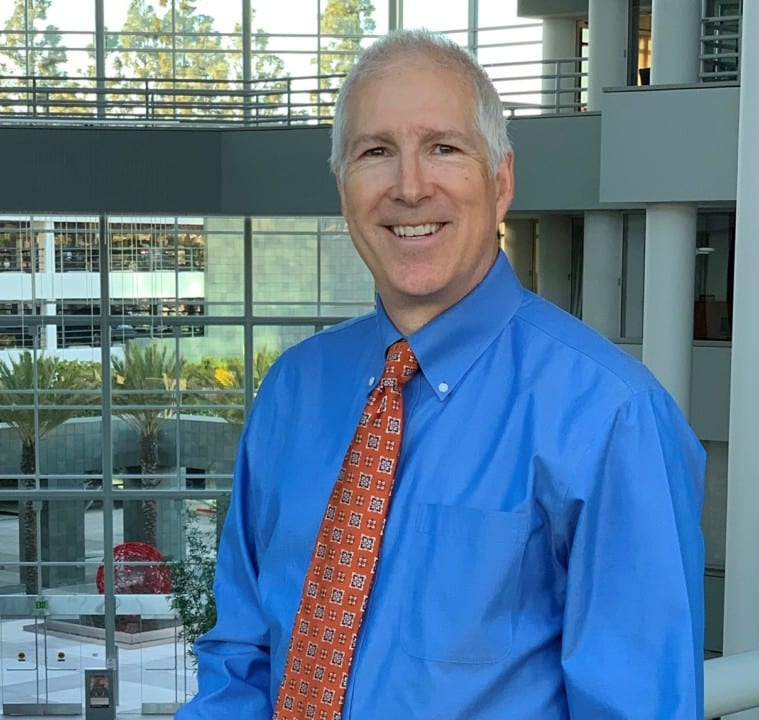 If there’s one trait all entrepreneurs share, it’s passion. In Jeff Garell’s case, it was a passion for helping people secure financial independence and protect their legacies that led him to establish Silversage Advisors, a thriving wealth management company in Irvine, California.

When the time came to turn his attention to community service eight years ago, Garell was equally passionate about helping children secure their futures through quality education. So he set out to find a nonprofit organization that shared this commitment.

His wife’s aunt suggested he look into a Santa Ana nonprofit named KidWorks, which at that time focused on providing after-school programs to underprivileged children. He figured the best way to get to know the organization was by regularly volunteering for its after-school program at the Dan Donahue Center.

Garell particularly remembers working with a fourth-grade girl who was struggling with math. After two months of working with “Mr. Jeff,” as the students affectionally call Garell, the equations started to make sense to her.

“I could just feel that I was a stone on her foot path in life,” Garell says with an expression of joy, pride and satisfaction. “I could see her eyes light up and she would laugh. For her to light up was a win-win for both of us.”

Garell’s passion for helping children secure their futures clicked with KidWorks’ mission to help them and their families lead more successful lives. He has since become a member of its Board of Directors and he and his wife, Karin, regularly donate to the organization.

It’s a journey many in the corporate world embark upon, yet the need still outweighs the supply of volunteers. American nonprofits took in more than $410 billion in 2017, but according to the Giving Institute and the Indiana University Lilly Family School of Philanthropy, only five percent of that was contributed by corporations.

For their part, uber-wealthy individuals like Warren Buffett and Bill and Melinda Gates have spearheaded The Giving Pledge, a coalition of one-percenters who donate most of the personal fortunes. Buffett leads by example, claiming he will give away 99 percent of his personal wealth. His shares of Berkshire Hathaway are earmarked to fund current needs rather than nonprofit endowments. 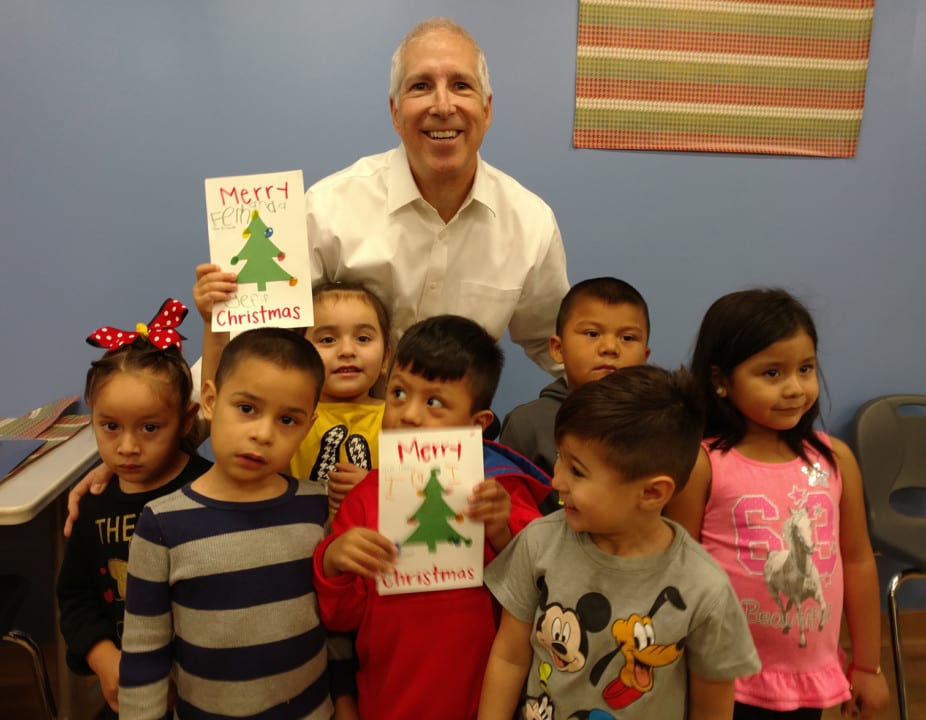 He goes on to say, “Channeling your energies into a cause you’re passionate about is the key to sustaining good work that is highly satisfying.” To identify the right charity for a long-term investment, Garell says business executives should start off by doing some light volunteering at a few different organizations to see for themselves what their people are like, the activities they’re engaged in and how to get involved. He also suggests looking at nonprofit transparency websites like charitynavgiator.org and guidestar.org to make sure an organization’s budget aligns with the mission they’re pursuing.

The fulfillment Garell gets from supporting nonprofits like KidWorks “is worth far more than the cost in the time and money Karin and I give,” he says.  “We’re all a part of one big community and personal responsibility to help others is the glue for that community.”

Garell traces the genesis of his community service back 30 years ago when he volunteered with Big Brothers of Los Angeles County. He became a big brother for a 12-year-old boy whose single mother thought her son needed a positive male role model. The duo went to UCLA football games, movies and “just sort of hung out, often on the basketball courts or at a park,” Garell says with a joyful smile. Nearly three decades later, he still stays in touch with his little brother.

Garell is drawn to helping children because he enjoys “their energy and inquisitiveness” and recognizes their need for guidance. “If these children don’t have education and personal self-confidence, it’s going to be difficult for them to advance when they’re done with high school,” he says.

KidWorks offers services to support children from preschool through college. Among its central strategies are getting children at a young age to understand the importance of working towards a college education. KidWorks also offers English, health and parenting classes to its students’ parents. 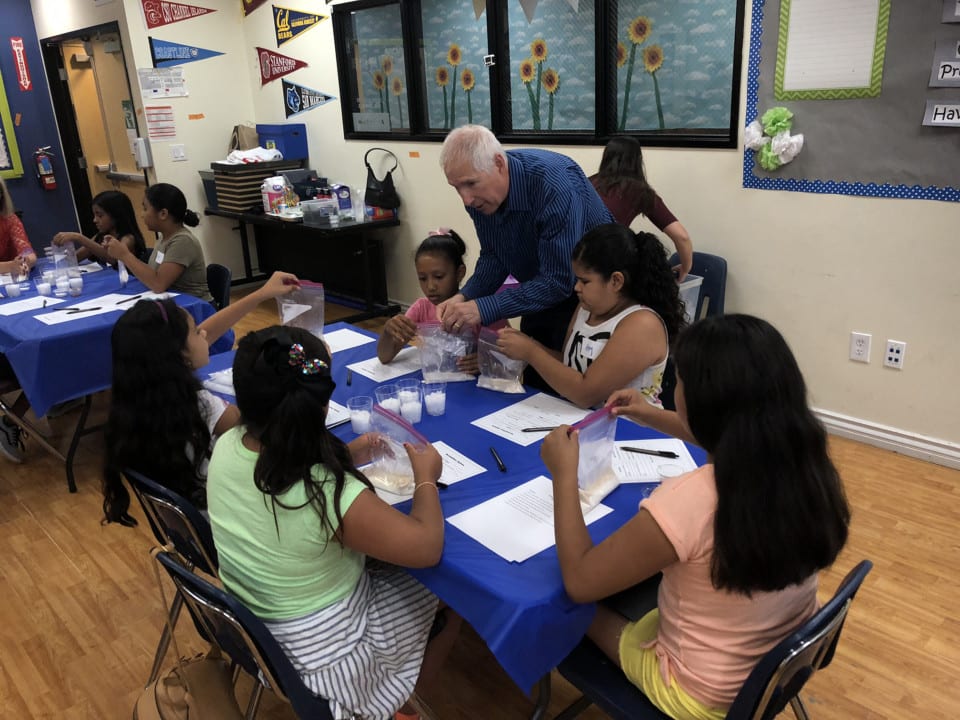 Over the last several years, all of KidWorks’ high school seniors have graduated and enrolled in post-secondary education or training. During that time, it has bulked up mentorships for its college students who face cultural and financial challenges just to stay in school. Garell ardently supports KidWorks’ efforts “to help young adults find solutions to the challenges that prevent them from earning a college degree,” he says.

When David Benavides, executive director of KidWorks Orange County, is asked about Garell, he pauses for a moment and shakes his head out of admiration.   “Jeff just has a great passion for our organization and he shares our belief that all children deserve an opportunity to succeed in life regardless of the neighborhood in which they grow up,” he says. “Jeff generously gives his time and talent. He is a true treasure. We sincerely appreciate all he has done over the years to the benefit hundreds of our students and their families.”

Garell’s passion for building better futures is equally evident in the way he challenges other entrepreneurs and corporate executives to follow his lead. “Our community is made up of board rooms and one-bedroom apartments. Perhaps vastly different, but all part of the same community, and there are great needs out there,” he says. “We’re all neighbors. Where are our area’s next leaders going to come from? Many people just need our help.” 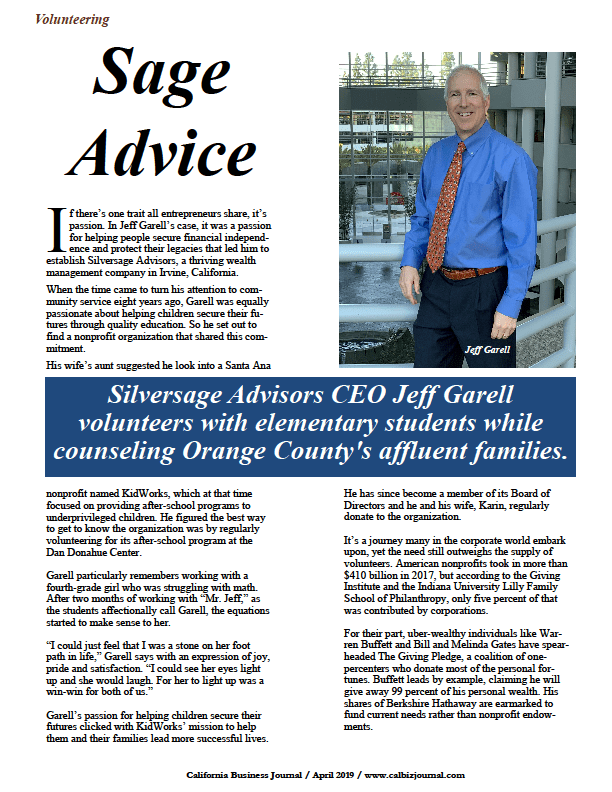 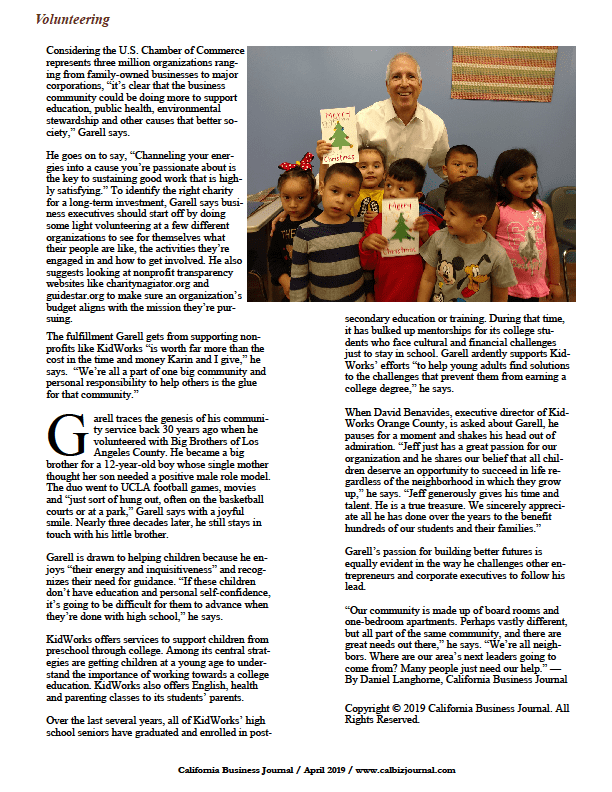 If you’re like us, visions of sugarplums aren’t the only things dancing through your head this time of year. Major changes in tax policy — the biggest reform in three decades — have given both investors and firms like Silversage Advisors a lot to consider in their financial planning as 2018 comes to a close.

Overall, the tax reform this year provided several ways for investors to reduce their tax bill or increase their refund. The change with the most direct impact has been the decline in tax rates for most income brackets…but there were a number of less-publicized changes as well.

Here’s a brief overview of the most significant tax reform changes:

With nearly double the standard deduction, taxpayers who typically itemize should revisit whether that strategy is still in their best interest. Of course, if deductions such as charitable donations, interest on student loans, etc. exceed the higher standard deduction, it still pays to itemize.

Now, homeowners can only deduct interest on mortgages of up to $750,000, down from $1 million allowed by the previous tax policy. This also applies to home equity loans if they are used to purchase a second property. And interest paid on home equity lines of credit is no longer tax deductible.

Other “pass-through” entities — sole proprietorships, LLCs, partnerships and S corps (which have fewer than 100 shareholders and are typically taxed as a partnership) — have also been affected. Many of these business owners will see a new deduction of 20% for qualified “pass-through” business income, a popular form of business income that is not taxed at the corporate level.

For many business owners, the revised deduction will reduce their income and provide the kind of tax savings found in a lower tax bracket. Those in a high tax bracket with a 37% rate could possibly bump down to a tax bracket with the lower rate of 29.6%. This deduction is reduced if the owner’s income is more than $157,500 if filing individually, or $315,000 if married filing jointly.

High-income earners in high-tax states like California and New York will likely pay more in federal taxes as a result of the SALT (State And Local Tax) deductions now being limited to $10,000.

For perspective, 33.86% of California returns filed in 2014 included a deduction for state and local taxes according to IRS data. The average California SALT deduction was $17,148.35.

Traditionally, 529 savings accounts were adopted to help families save for a college education. They allow funds to grow tax-free until withdrawn for qualified education expenses such as tuition, supplies, computers, etc. But for federal tax purposes, the new changes have expanded the use for these plans to include attendance costs for private or religious elementary and secondary school tuition. In many (but not all) states, these new uses have been approved for state tax benefits as well.

For primary education (K-12) expenses, funds in a 529 account can be used to pay for up to $10,000 each year per student (there’s no limit for qualified college expenses). Contribution limits are unchanged at $15,000 per year for individuals and $30,000 for joint filers.

Although tax policy has incurred considerable changes, some policies many thought would be included in the overhaul have remained intact. For example, taxes on capital gains and dividends still start at 15% for taxpayers in the lower brackets and up to 23.8% for those in the highest. And retirement accounts like 401(k)s and IRAs continue to provide the same tax breaks.

For traditional IRAs and employer-offered 401(k) plans, taxpayers can deduct any contributions made to these accounts from their income tax, and delay paying a tax until they withdraw the money in retirement years. For Roth accounts, investors who deposited funds over the years can continue to rely on that money not being taxed when they withdraw it.

It’s always wise to consult your tax adviser and/or CPA when considering year-end tax strategies. We wish you a prosperous new year and are happy to discuss any questions you have regarding the impact this year’s tax reform may have on your wealth planning strategies.

Previously, we blogged about possible seasonal weakness heading into September/October. The possible came to pass, with the stock market trading in an unsettled fashion. Volatility has been high as investors weigh the effects of rising interest rates, tariffs and potentially slowing global growth against the backdrop of corporate earnings season. Investors don’t like uncertainty, and the increased number of factors that could cause trouble has not gone over well on Wall Street.

The good news? The underlying economy remains strong. Wage growth is solid, though the pace of increase could be a concern (inflationary), which we’re watching. Corporate profits had a very good 3Q, with 80% of the publicly traded companies exceeding Q3 estimates.

The markets are trying to digest rising interest rates, and so far it’s been orderly—but we expect volatility to remain high over the next 18 months as interest rates normalize back to historical levels. Current fear gauges are also starting to show excessive levels—which is a contrarian good thing for the markets. So, fundamentally, these elements should help stocks in the coming months.

Finally, a word on politics.  As you know we typically stay away from political discussions, wading in if/when it relates directly to the markets and your accounts. Clients are asking us about the impact, if any, from the Supreme Court process, upcoming midterm elections and/or the White House. So far, little if any impact.

We use the following analogy: The markets are like a well-conditioned dancer who depends on strong legs (corporate profits) and a stable dance surface (the economy).  While the musical tune from one administration to another may change, merely affecting the dancer’s style, the markets should remain spry and upright as long as the economy and profits are stable and growing.

No matter your dance tune preference, we value your business, friendship and any questions and comments you have.